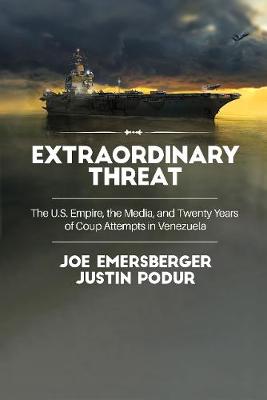 Extraordinary Threat: The U.S. Empire, the Media, and Twenty Years of Coup Attempts in Venezuela

Description - Extraordinary Threat: The U.S. Empire, the Media, and Twenty Years of Coup Attempts in Venezuela by Justin Podur

In March 2015, President Obama initiated sanctions against Venezuela, declaring a "national emergency with respect to the unusual and extraordinary threat to the national security and foreign policy of the United States posed by the situation in Venezuela." Each year, the U.S. administration has repeated this claim. But, as Joe Emersberger and Justin Podur ague in their timely book, Extraordinary Threat, the opposite is true: it is the U.S. policy of regime change in Venezuela that constitutes an "extraordinary threat" to Venezuelans. Tens of thousands of Venezuelans continue to die because of these ever-tightening U.S. sanctions, denying people daily food, medicine, and fuel. On top of this, Venezuela has, since 2002, been subjected to repeated coup attempts by U.S. backed forces. In Extraordinary Threat, Emersberger and Podur tell the story of six coup attempts against Venezuela.
This book deflates the myths propagated about the Venezuelan government's purported lack of electoral legitimacy, scant human rights, and disastrous economic development record. Contrary to accounts lobbed? by the corporate media, the real target of sustained U.S. assault on Venezuela is not the country's claimed authoritarianism or its supposed corruption. It is Chavismo, the prospect that twenty first century socialism could be brought about through electoral and constitutional means. This is what the U.S. empire must not allow to succeed.

Other Editions - Extraordinary Threat: The U.S. Empire, the Media, and Twenty Years of Coup Attempts in Venezuela by Justin Podur 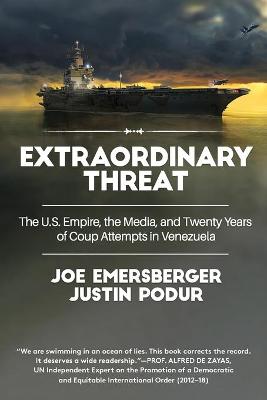 A Preview for this title is currently not available.
More Books By Justin Podur
View All