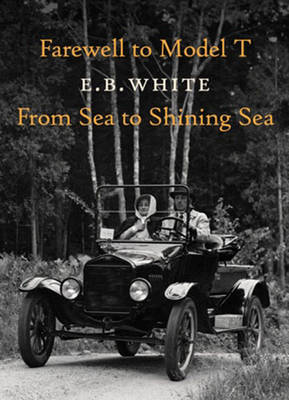 From Sea to Shining Sea Main

Description - Farewell to Model T by E. B. White

In 1922, just out of college and at loose ends, E. B. White set off across America in his Model T. He left his map at home, but packed his typewriter and dictionary-his true destination, he tells us, was the world of letters. Along the way, he also discovered America: "My own vision of the land-my own discovery of it-was shaped, more than by any other instrument, by a Model T Ford...a slow-motion roadster of miraculous design-strong, tremulous, and tireless, from sea to shining sea." White first wrote about the flivver in "Farewell to Model T," which appeared in The New Yorker in 1936. Rich in comic descriptions of the T's many eccentricities and the absurd demands it put on its devoted owners, this was the first of White's essays to bring him fame. It is here published for the first time with "From Sea to Shining Sea," in which he conjures the backroads and main streets of an unspoiled America. Together, these essays are an affectionate tribute to the car that holds a mythic place in the American imagination.

A Preview for this title is currently not available.
More Books By E. B. White
View All