From Commune to Capitalism

Description - From Commune to Capitalism by Zhun Xu

"Zhun Xu's careful analysis debunks the conventional wisdom about the supposed failure of agricultural collectives in China. Xu's reassessment of the path of agrarian change in China since 1949, which relies on interviews with peasants as well as statistical analysis, provides a fascinating window into the successes and the problems of collective farming in China."-David M. Kotz, Professor of Economics, University of Massachusetts Amherst; author, The Rise and Fall of Neoliberal Capitalism

In the early 1980s, China undertook a massive reform that dismantled its socialist rural collectives and divided the land among millions of small peasant families. Known as the decollectivization campaign, it is one of the most significant reforms in China's transition to a market economy. From the beginning, the official Chinese accounts, and many academic writings, uncritically portray this campaign as a huge success, both for the peasants and the economy as a whole. This mainstream history argues that the rural communes, suffering from inefficiency, greatly improved agricultural productivity under the decollectivization reform. It also describes how the peasants, due to their dissatisfaction with the rural regime, spontaneously organized and collectively dismantled the collective system.

A closer examination suggests a much different and more nuanced story. By combining historical archives, field work, and critical statistical examinations, From Commune to Capitalism argues that the decollectivization campaign was neither a bottom-up, spontaneous peasant movement, nor necessarily efficiency-improving. On the contrary, the reform was mainly a top-down, coercive campaign, and most of the efficiency gains came from simply increasing the usage of inputs, such as land and labor, rather than institutional changes. The book also asks an important question: Why did most of the peasants peacefully accept this reform? Zhun Xu answers that the problems of the communes contributed to the passiveness of the peasantry; that decollectivization, by depoliticizing the peasantry and freeing massive rural labor to compete with the urban workers, served as both the political and economic basis for consequent Chinese neoliberal reforms and a massive increase in all forms of economic, political, and social inequality. Decollectivization was, indeed, a huge success, although far from the sort suggested by mainstream accounts.

Other Editions - From Commune to Capitalism by Zhun Xu 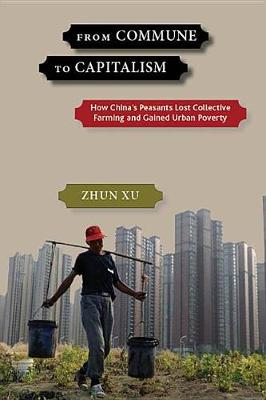 A Preview for this title is currently not available.
More Books By Zhun Xu
View All