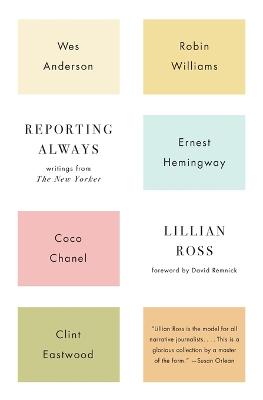 From the inimitable New Yorker journalist Lillian Ross-"a collection of her most luminous New Yorker pieces" (Entertainment Weekly, grade: A).

A staff writer for The New Yorker since 1945, Lillian Ross is one of the few journalists who worked for both the magazine's founding editor, Harold Ross, and its current editor, David Remnick. She "made journalistic history by pioneering the kind of novelistic nonfiction that inspired later work" (The New York Times).

Reporting Always is a collection of Ross's iconic New Yorker profiles and "Talk of the Town" pieces that spans forty years. "This glorious collection by a master of the form" (Susan Orlean) brings the reader into the hotel rooms of Ernest Hemingway, John Huston, and Charlie Chaplin; Robin Williams's living room and movie set; Harry Winston's office; the tennis court with John McEnroe; Ellen Barkin's New York City home, the crosstown bus with upper east side school children; and into the lives of other famous, and not so famous, individuals.

"Millennials would do well to study Ross and to study her closely," says Lena Dunham. Whether reading for pleasure or to learn about the craft, Reporting Always is a joy for readers of all ages.

A Preview for this title is currently not available.
More Books By Lillian Ross
View All