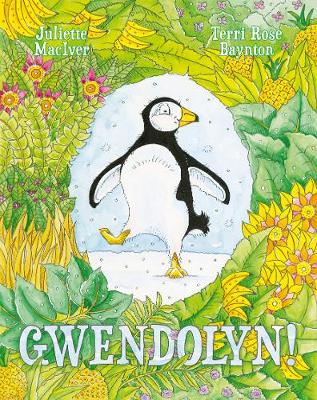 A PENGUIN IN THE JUNGLE?

In the jungle there are jaguars, monkeys and parrots aplenty, but there are no penguins. None at all. Because penguins do not live in the jungle, except for ... GWENDOLYN!

A story about friendship, adventure and finding your home.

'Juliette MacIver cleverly explores concepts around identity in this upbeat picture book for readers aged two and up: how one can assimilate to a strange environment and be happy there; and how being different is not necessarily a bad thing.' -- Books + Publishing, four stars

'The story is easy to read aloud and has just the right amount of repetition and prompting to encourage youngsters to join in ... The illustrations are bright and colourful, yet soft at the same time, which I like for the targeted 2-5 year old audience. There's animals to identify and count and the colourful feather endpapers are a delight. Gwendolyn is a lovely story to read and enjoy, or could be used as a prompt for a discussion about belonging.' -- Reading Time

Other Editions - Gwendolyn! by Juliette MacIver A Preview for this title is currently not available.
More Books By Juliette MacIver
View All