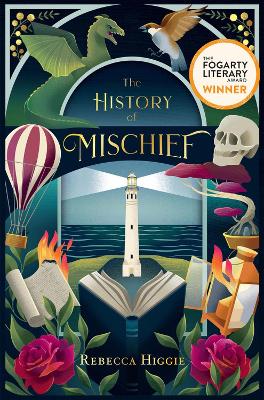 The History of Mischief

Description - The History of Mischief by Rebecca Higgie

In her award-winning debut novel for young adults, Rebecca Higgie takes us into the secret lives of history's mischief-makers - the philosophers and tyrants, the shapeshifters and dragons. Narrator Jessie is the girl who might just expose how they all connect.

When Jessie and her older sister Kay find a book called The History of Mischief, hidden beneath the floorboards in their grandmother's house, they uncover a secret world. The History chronicles how, since antiquity, mischief-makers have clandestinely shaped the past - from an Athenian slave to a Polish salt miner and from an advisor to the Ethiopian Queen to a girl escaping the Siege of Paris. Jessie becomes enthralled by the book and by her own mission to determine its accuracy.

Soon the History inspires Jessie to perform her own acts of mischief, unofficially becoming mischief-maker number 202 in an effort to cheer up her eccentric neighbour, Mrs Moran, and to comfort her new schoolfriend, Theo. However, not everything is as it seems. As Jessie delves deeper into the real story behind the History, she becomes convinced her grandmother holds the key to a long-held family secret.

The History of Mischief is about the many things we do to try to escape grief, and the stories we tell in order to protect ourselves and those we love.