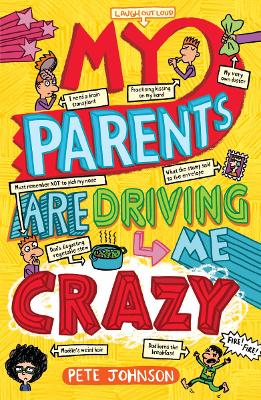 My Parents are Driving Me Crazy

Description - My Parents are Driving Me Crazy by Pete Johnson

From the Author of 'How to Train Your Parents' and 'My Parents are Out of Control' comes the latest hilarious volume of Louis's adventures. Louis's parents swap roles. So now Dad is at home all day. And soon he's cooking meals no one wants to eat (Louis would rather eat his brother's bogies) And Dad even gives Louis his own duster, so he can clean his bedroom himself. Louis is outraged. Cleaning is what parents do. Louis is far too busy. And that's just the start. It's not long before there is total chaos. Louis and his brother quickly decide 'Dads are just not meant to be Mums.' Or are they? Meanwhile at school never Louis's favourite place ("I've never liked it, never fitted in and I'm rubbish at all my lessons") he is in massive trouble for forging a letter to the deputy head from his dad. No one understands how Louis had no choice... And then there is the moment when he appears on TV and something TRULY, YUKKY happens... Says Pete Johnson, "I've never written a more disgusting scene or I hope, a funnier one." AGES: 7-11 AUTHOR: Pete Johnson began work as a film critic for BBC Radio One, then became a teacher. He is the author of over forty books, including the bestselling How to Train Your Parents. Pete's books have won various awards, including the Young Telegraph Award and the Brilliant Book Award, and have been translated into twenty-four languages. Also short-listed for Blue Peter Book Award. www.petejohnsonauthor.com REVIEWS: "In 12-year-old Louis, Pete Johnson has created a boy who makes you laugh out loud." Sunday Times 23 b/w illustrations

Buy My Parents are Driving Me Crazy by Pete Johnson from Australia's Online Independent Bookstore, BooksDirect.

A Preview for this title is currently not available.
More Books By Pete Johnson
View All